A police commando who was seriously injured in heavy firefights between Israeli troops and Palestinian gunmen in the northern West Bank on Friday morning has died of his wounds, police said.

Raz “fallen this morning in a fight with armed terrorists who opened fire on our forces during an operation in the village of Burqin near Jenin. During the battle, he was injured and evacuated by helicopter to Rambam Medical Center in Haifa, where he was pronounced dead,” police said.

Raz, founder and resident of the Kida settlement in the West Bank, leaves behind a wife and six children. Police hailed him as an experienced fighter who had “participated in hundreds of operations to prevent terrorism, risked himself and saved lives”.

He was a brave, professional and humble fighter,” the statement read.

Raz was hit as forces completed an operation that included raids on the homes of terrorist suspects. A senior army central command officer said the amount of gunfire directed at troops on Friday was “indescribable”.

The Israel Defense Forces earlier acknowledged that army and Shin Bet as well as Yamam forces were operating in Burqin in order to arrest a number of suspects.

A masked Palestinian fires an automatic weapon during clashes with Israeli security forces in the West Bank city of Jenin on May 13, 2022. (Jaafar Ashtiyeh/AFP)

“During the operation, Israeli forces fired on armed terrorists who opened heavy fire and threw explosives towards them…As part of the operation, the forces used various special measures to arrest a suspect who barricaded himself inside his house and eventually surrendered with his brother,” read a joint statement released by police and the IDF.

According to the IDF, five suspects were arrested in the West Bank overnight and this morning, and illegal weapons were seized in the city of Hebron.

Military officials said suspects arrested in the Jenin area were responsible for shooting attacks on soldiers in recent weeks.

The Palestinian Authority Health Ministry said 13 people were injured, including one in critical condition, in the fighting in Jenin.

Palestinian reports said Israeli forces surrounded a suspect’s house and called on everyone inside to surrender. The Islamic Jihad terror group has identified the suspect, Mohammad al-Dab’i, as a member of its armed wing.

The video showed an Israeli soldier firing a shoulder-launched missile at the house, with smoke rising from the building.

A separate clip showed the house on fire. It wasn’t clear if anyone was inside.

The suspect’s father later told Palestine TV that his son was arrested after “hours of siege”.

Clashes were also reported in the nearby Jenin refugee camp.

One of the injured Palestinians was named Daoud Zubaidi. Her brother, Zakaria Zubeidi, is a convicted terrorist leader who last year escaped from Gilboa prison for a week before being recaptured. Daoud Zubaidi was then taken to an Israeli hospital for treatment, according to the Ynet news site. He was listed in serious condition. 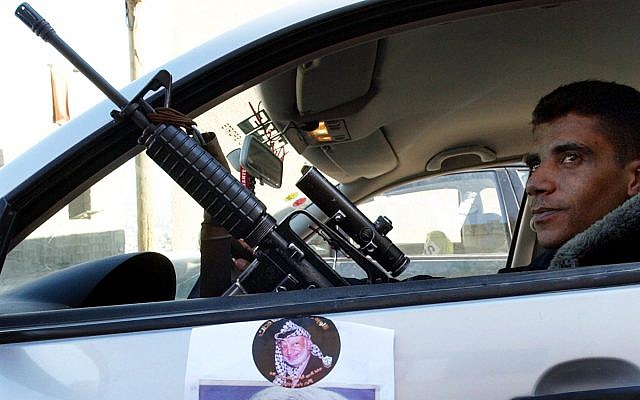 Zakaria Zubeidi, then local commander of Fatah’s terror wing, the Al-Aqsa Martyrs Brigades, sits in a car adorned with a poster of former Palestinian leader Yasser Arafat, in the northern city of Jenin from the West Bank, December 2, 2004. (AP Photo/Mohammed Ballas)

Several of the Palestinian terrorists behind the recent deadly attacks that killed 19 people were from Jenin and its surroundings. Israeli forces have carried out raids in the area, including an operation on Wednesday morning in which a prominent Al Jazeera journalist was shot dead during clashes between armed Palestinians and Israeli soldiers, further aggravating the tensions.

It is not yet known who shot Shireen Abu Akleh. Palestinian Authority President Mahmoud Abbas accused Israel of “executing” her. Israeli officials said it is too early to determine who fired the bullet that killed her. Israel is investigating and has asked the PA to join in the investigation, which it has refused to do. Defense Minister Benny Gantz reportedly told foreign reporters on Wednesday evening that it could have been “the Palestinians who shot at him”, or fired from “our side”.

You are a dedicated reader

We’re really glad you read X Articles from The Times of Israel over the past month.

That’s why we started The Times of Israel ten years ago – to provide discerning readers like you with must-read coverage of Israel and the Jewish world.

So now we have a request. Unlike other media, we don’t have a paywall in place. But since the journalism we do is expensive, we invite readers to whom The Times of Israel has become important to help support our work by joining The Times of Israel community.

For just $6 a month, you can help support our quality journalism while benefiting from The Times of Israel WITHOUT ADVERTISINGas well as access Exclusive Content only available to members of the Times of Israel community.

Thanks,
David Horovitz, founding editor of The Times of Israel